Prevailing theories posit plaques in the brain cause Alzheimer’s disease. New UC Riverside research points to cells’ slowing ability to clean themselves as the likely cause of unhealthy brain buildup.

Along with signs of dementia, doctors make a definitive Alzheimer’s diagnosis if they find a combination of two things in the brain: amyloid plaques and neurofibrillary tangles. The plaques are a buildup of amyloid peptides, and the tangles are mostly made of a protein called tau.

“Roughly 20% of people have the plaques, but no signs of dementia,” said UCR Chemistry Professor Ryan Julian. “This makes it seem as though the plaques themselves are not the cause.”

For this reason, Julian and his colleagues investigated understudied aspects of tau protein. They wanted to understand whether a close examination of tau could reveal more about the mechanism behind the plaques and tangles.

Unraveling the complexity of vitamin B12 diseases — ScienceDaily 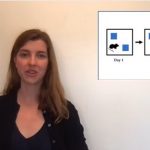 How to prevent cognitive decline — ScienceDaily

Breaking News January 21, 2022
Physical activity, nutrition and cognitively stimulating activities are all known to be good ways to prevent Alzheimer's disease and dementia. And older adults at...

Wiggling worms suggest link between vitamin B12 and Alzheimer’s — ScienceDaily