Filling half of a child’s plate with fruits and veggies isn’t just recommended by the United States Dietary Guidelines, it also helps increase the amount of produce that kids end up eating, according to Penn State research.

In a controlled feeding study, the researchers tested two strategies for encouraging kids to eat more fruits and vegetables.

The researchers found that adding more fruit and vegetable side dishes resulted in the kids eating 24 percent more veggies and 33 percent more fruit compared to the control menus. Substituting fruits and…

The sunshine vitamin that ‘D’elivers on cardio health — ScienceDaily 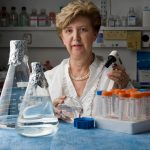 Why Strawberries Should be Part of a Healthy Alzheimer’s Diet

An ‘ace in the hole’ against SARS-CoV-2 infection — ScienceDaily